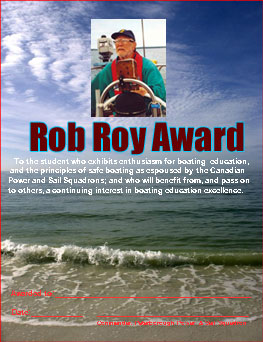 The Rob Roy Award is awarded periodically in memory of our former Assistant Training Officer, Rob Roy, to the Boating Class student who is judged by the Instructors and Proctors to exhibit enthusiasm for boating education and the principles of safe boating and who will benefit from, and pass on to others, a continuing interest in boating education excellence. Catherine Roy presented the award from its inception in 2002 through to 2007. 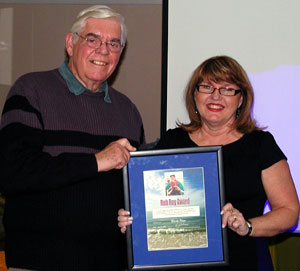 Rob Roy loved to sail. He began sailing in his teens and joined the Navy as a telegrapher during the Second World War. After returning from the war, Rob once again began to sail on Clear Lake and elsewhere in the Kawarthas. Rob's occupation was as a photographer with the Roy Studio, a business started in Peterborough by his grandfather. In later years, Georgian Bay called to Rob and never let him go.

Rob's wonderful sense of humour made his courses very enjoyable. Rob started the question and answers sessions to prepare students for the Boating exam, something the Squadron continues to do in its training classes today. His personal goal was that of what he learned through CPS-ECP for safe boating.

Past Commander Jack Scott and Past District Training Officer Doug Cook had the pleasure of a week's sail with Rob and were amused by Rob's one strict rule, "No drinking of alcoholic beverages until the Expeditis is well anchored."